The VSA Awards Presentation  was held on 8th August, 2015 at Bacchus  Marsh in Victoria.

At the awards, the Soaring Club of Tasmania was honoured to receive the Maurice Little Memorial Trophy for significant achievements in club development trophy 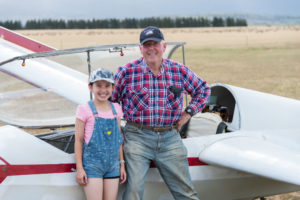 The Maurice Little Memorial Trophy is awarded by the VSA Executive to a VSA Club which has made significant achievements in the development of their Club. This trophy was created in 2013 to honour the memory of Maurice Little who served for many years as both VSA and GFA Development Officer. The trophy was kindly donated by Maurice’s employer, International Trade Management in Tullamarine.

We received the award in recognition of our club development over recent years, including increased instructors and increased membership and a new glider to our fleet. The award was gladly accepted by John Spilsbury who is currently travelling in his powered glider to the sunny state of Queensland. We couldn’t find a photo of John receiving the trophy but here he is after just landing.